Beyond Concussion: Return to School and Play 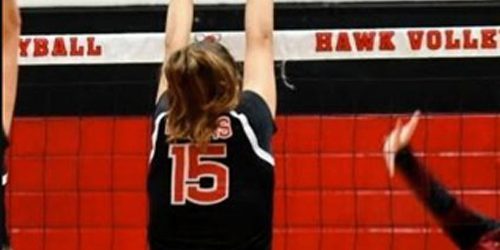 The case of the high school Volleyball Concussion

“Thank you for seeing M last week! She is feeling much better and was cleared from her concussion on Friday! Thanks so much for your help.”

On a recent Tuesday evening a high school volleyball player took a powerful bump to her head from a ball during pre-game warm-ups. As the national anthem played she began feeling worse and worse. Something was wrong. The athletic trainer checked for concussion and advised her to stay home the next day.

Thursday she saw the concussion specialist at school. They said she was ok to return to class but go to the school nurse’s office as needed to rest. The day was a struggle. She was having headaches and not able to tolerate being in class due the bright lighting. In addition she was exhausted.

Friday she stayed home and all weekend kept sensory stimulus to a minimum including wearing sunglasses while inside. Mom and Dad were so worried. How else to get help? Luckily mom knew the mom of another athlete whose post-head injury recovery was helped by Kinetic Konnections.

Monday Mom called Kinetic Konnections and wanted to know how soon they could come in. Had her daughter been checked by athletic or medical professionals? Yes. In that case we could see her as soon as schedules allowed. Lynne was able to see her the next day.

Tuesday M. went to Kinetic Konnections where they checked if her head and body were centered and working together. They re-organized her movement so her head was centered again. (Read more details below)

Wednesday there was a check-in text from her mom asking how she was doing. The response — “Surprisingly feel pretty good!” It was her first full day of classes in a week.

Friday M. was cleared to return to play.

Step 1: What exactly occurred?
The volleyball was spiked straight down onto her head, hitting on the side in the temple area. She did not fall over.

Step 2: Assess which of her foundational movements were impacted
Our movement assessment showed her head movement was unstable and that her core was working too hard trying to compensate, so core movement was actually rigid. (This likely accounts for much of the fatigue. A rigid core doesn’t easily support efficient breathing.)

Step 3: Assess Sensory System Integration challenges
Our assessment also revealed that her eye tracking and head movement were synchronized but strained — lots of blinking with only specific directions of movement.

The other aspect of sensory integration, balance control, revealed some poor integration when seated. Standing was fine. This indicates that tasks such as sitting at school take extra effort and tire the sensory systems more easily.

Step 4: Assess the role of prior injuries, trauma or medical procedures
Yes — there was an earlier laparoscopic appendix surgery. This caused some protected-ness in the movements of the lower core. The flow of movement in her lower body just wasn’t as fluent and centered as it should be.

(There was also a prior shoulder injury which was remembered during her second appointment.)

Although these don’t directly relate to the head injury, there is a relationship to balance and fatigue.

Step 5: Ascertain early developmental implications to the head/body relationships
Another complicating factor, she was born via C-section due to an emergency situation at birth. In general we find head and shoulder movement relationships are often skewed when born via C-section due to the manner in which the babies are pulled out. There is generally stress to one arm and the neck.

The C-section implications are something taken into account while assessing and comparing to the relationships of the volleyball trauma. They may be a factor in reconstructing the head and core movement relationships. It is something we stay tuned into throughout the overall process.

At Kinetic Konnections, the first goal is re-center movements of the core and head. Centered relationships allow the sensory and nervous systems to calm since their function is based upon bilateral symmetry. The gentle Bridging technique movements are used to re-organize the movements of the head and core.

In just the first session Lynne was able to re-establish M’s movements between her body head. Once M’s head movement was stabilized, Lynne re-centered her head. The symmetry restored to M’s body resulted in feeling lighter and moving more fluently.

M returned once more two weeks later for a re-check. Her headaches were gone. The session was spent working on shoulder movement related to a prior injury.

Our wishes for a strong finish to the season!

The top three HS sports for concussions are:

Read more in this October 2019 summary reported by CNN.

We take your entire history into account looking at how your head, core and limbs currently work together compared to how they are naturally supposed to work together. This leads us to the missing piece of your puzzle and allows us to get you back on your way to moving well.

The steps in our unique problem-solving process include: 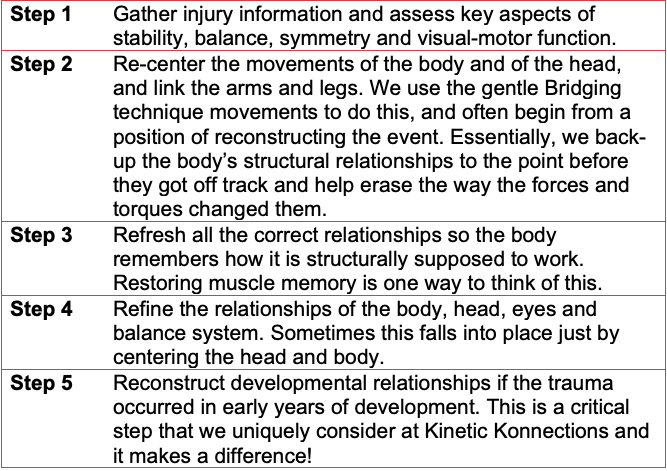 During October different scenarios of head injury were shared along with how the Kinetic Konnections’ unique perspective addresses overlooked aspects which are essential to recovery.

In our FB videos I share a more detailed explanation of how we resolve head injury issues using the Bridging technique. (You do not need a FB account to watch)

Pain, Injury, or Behavior Got You Stressed Out?
January 15, 2021
Go to Top
This site uses cookies to personalize your experience. By clicking on this notification you are consenting to the terms of use. Find out more.