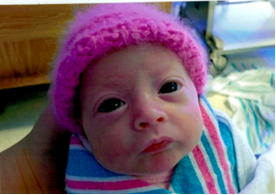 Medical Miracles!
This year I have been writing about birth characteristics and the related long-term effects we observe. Medical miracles at birth allow most babies born from 24-36 weeks to survive. For many of the families we meet, it is also the beginning of a journey of unknowns. Nine-year-old Megan, born at 27 weeks (left), and her remarkable story are featured below.

My own amazing medical miracle child turns 21 this week. After being pronounced cancer-free at age 10, we were put on a journey of unknowns with invisible cognitive, physical, and social-emotional gaps following 38 months of chemo, 11 hospitalizations, 2 surgeries, 38 lumbar punctures (spinal taps.) These gaps are now called “late effects” and we had to figure out how to bridge them on our own, a significant thread in the Kinetic Bridging® story.

An Early Start Lands Megan in the .77% Club 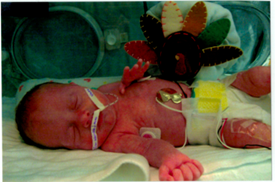 Megan’s Early Entry Into This World

Nine-year-old Megan was a fighter from the minute she was born. Born via C-section at 27 weeks, she came out breathing and with little complications. She would stay in the NICU for five weeks but to her parents’ excitement and relief, left the hospital without any major concerns. She was one of only 33,234 babies born before 28 weeks of gestation in 2007, a rare .77%.  Even more remarkable was the lack of complications, which are common in babies born under 36 weeks.

“At that point, it was a matter of helping make her stronger,” Megan’s mother, Beth, described. “So, we did have to feed her every two hours and use the aspirator a lot to help clean her nose. Some issues did surface within the first few months including development of a form of apnea and a diagnosis of torticollis. Both resolved themselves fairly quickly.”

Megan grew into a typically developing toddler. She walked on her adjusted birth date and began talking within the typical time frame. Her parents got her started with gymnastics and involved with other age-appropriate activities. Her mother said there was very little concern until about three years old when Megan came down with the Croup and she was diagnosed with asthma. An inhaler and occasional nebulizer were needed.

In addition to the asthma, Beth noticed that Megan, unlike her older sister, had a more difficult time performing some of the gymnastic movements, particularly a cartwheel. For years, Megan would try and try. Somewhat familiar with body mechanics, Beth wondered why Megan couldn’t master a cartwheel.

Beth heard about Kinetic Konnections through family members. Wanting her daughter to feel confident, both academically and physically, she made an appointment.

“I am pretty sure it was Megan’s first visit where she walked out of the office after seeing Cara for one hour and was able to do a cartwheel! It was amazing! I will never forget the smile on Megan’s face.”

At age 7, Megan could finally do a cartwheel with all the other girls in her gymnastic class. Even the gymnastic teacher noticed the accomplishment! That was in April of 2015.

It’s been nearly two years since. Megan can do a cartwheel and a backbend and has an improved posture, better handwriting, and increased self-confidence. Megan and her parents are thrilled with the results and continue to visit Kinetic Konnections as Megan grows. Most recently, Megan has been working on advanced gymnastics skills and improved breathing.

“We are so pleased with her development and feel so blessed,” Beth said. “Every child is a miracle and some miracles are stronger than others, and so we were definitely blessed.”

Born at 27 weeks with five weeks spent in NICU means Megan came home at 32 weeks, still 7-8 weeks before most babies enter the world. So many of her body’s systems had to do a crash course of learning to work together.  Breathing, motor coordination, and visual-motor development are common areas of challenges for children who were pre-term babies. The NIH funded a summary published in 2012 noting these effects.

Early births, from a movement perspective, bring two challenges. There are specific stages of movement development which are missing. Megan was born via C-section so there is a missing aspect of compression for a more complete breathing and metabolic transition.

The NICU monitoring devices on hands and feet literally position the beginning of movement with some unusual relationships. We like to see photos from the NICU for clues on these important limb-core relationships. The photo shown of Megan proved useful—the position of her left arm has been a factor for everything from cartwheels to writing to breathing.

Although not a concern for Megan, time spent in the NICU often puts stress on fragile sensory systems. Noise in the NICU environment is a huge change from the predictable and muted environment of the womb. (An acoustic gap between the NICU and womb: a potential risk for compromised neuroplasticity of the auditory system in preterm infants published in the Frontiers in Neuroscience.)

We used the Bridging® technique to replicate the earliest of movements missed from the pre-term birth. We systematically progress the movements and sensory integration until they match chronological age.  In Megan’s case, the first session matched the movement of the right and left sides of her body. Just that was enough to allow her to coordinate the cartwheel! From there on we have worked on much more specific and complex movements.

Megan has also grown much taller which means the physics of her movements needed help to transition. In the two years since we met Megan we have worked together 10 times—the past few times being tweaks during appointments shared with her sister.

It truly is wonderful to see how Megan is growing into a confident and talented girl and how her parents have navigated the unknowns of parenting the once-early pre-term baby.

Visual-Motor System Need an Upgrade, or Just an Update?
September 19, 2019

Trouble with Fine Motor Skills? Why Tummy Time is So Important
September 13, 2019