Scott and His Body Casts

One hot summer an eight-year-old was sidelined with a full body cast bummed at the loss of his budding soccer career.

Fast forward 29 years later…Meet Scott, a father of two preschoolers. He has struggled with chronic body aches and pains which limited his ability to play with his little ones. The pain used to leave him unsure of being able to get up from playing on the floor. Scary and heart-breaking at the same time.

His days consisted of revolving shoulder pain, back pain, hip discomfort, and plantar fasciitis. He was told he has a hip of a person twice his age. In his quest to have a pain-free life, Scott has been to a range of professionals with limited relief. “As an adult, I have always had a very stiff back, I don’t have range of motion, and can’t touch my toes when I bend over.”

Scott has transitioned from being in constant pain to getting specific pain from specific activities. “Kinetic Konnections has become a key part of my maintenance to help keep range of motion. I feel looser and not as restricted in my movement,” he said. “I am working toward living out of pain with a good quality of life—enjoying activities with my kids and wife!”

The Fall, Surgeries, and Casts 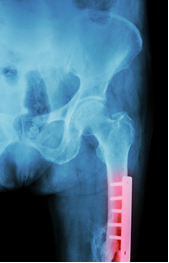 In the spring of 1985, young Scott was very athletic playing soccer since age three and was just joining his first Little League Team.

He was eight-years-old when his right hip broke a fall at a friend’s home. One metal plate, five screws, and a full-body (armpit to toes) cast later, Scott was all set for a summer on the sidelines allowing his leg to heal.

He spent six months in a series of casts and missed the start of third grade in the Fall. When the casts finally came off he had to learn how to walk all over again. Six months later, there was another surgery to remove the hardware in his leg.

That wasn’t the end of his adventures. At age 13 was another surgery and set of casts to remedy uneven leg growth. Now 38, Scott will never forget the experience of the first surgery, nor the life-long effects it has had on his body.

Now as an adult, Scott doesn’t want to have to be cautious of every move he makes. He wants the ability to keep up with his growing children and he wants to maintain a healthy exercise routine without injuring himself.

Bridging® to the Rescue

When Scott first came to Kinetic Konnections, it was not for himself, but rather for his son. However, as Cara and her team worked on his son, he wondered if this could help him too. He mentioned his history to Cara, and she explained how Bridging® could help him regain movement. He said, “Sign me up!”

Last August, Scott added sessions at Kinetic Konnections to his repertoire of regular massage and Yin Yoga. “I totally feel a difference, particularly right away.” he said.  “My legs do not feel as heavy and body parts seem to work together better.” 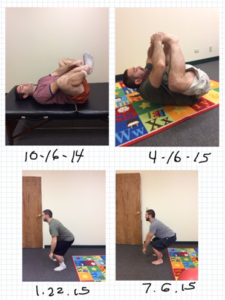 We’ve worked through the layers of restrictions and compensations related to each cast—each cast change created a different layer of compensations since each was sequentially less restrictive. The key to Scott feeling better was restoring differentiated movements and wiggles in his core (see PEANUT from June 2015 newsletter.) We also had to restore the ability of his legs and core to move and wiggle in sync with each other.

Scott has been in for a total of 10 sessions since we met in August 2014. Generally able to move for everyday activities, Scott stops in every few months to work on whatever surfaces related to new activities or following a strenuous event (such as a recent road trip.) We keep working through more layers to make him a more flexible and adaptable guy.

Two recent sessions were before and after three rocking days of Grateful Dead concerts when he knew he was going to be pushing physical limits. His text sums it up “…I felt so light all day long. It was really amazing today. I wish I felt this good everyday!”

Why Does Immobilization Cause Long Term Issues?

Unobserved by the eye, there are little oscillating nano-movements rippling throughout our limbs and core all the time. New movement sensor technology is capable of monitoring and displaying these hidden movements (yes, Cara is a geek and has some of these sensors.)

A cast inhibits the body’s ability to transmit the tiny waves of motion through the area of immobilization. The long-term casting shuts down the body’s natural oscillations (different systems in the body have their own unique oscillation frequencies) which we find leads to long-term stiffness and pain. When a cast is removed, the body is not able to restore these subtle layered movements on its own.

There are recent studies highlighting the benefits of the oscillatory movements to the healing abilities of the body. A 2013 study shows how ultrasound oscillation is being used to help stubborn bone fractures heal faster.

A recent BBC article discusses how high frequency sound waves from ultrasound are being used to promote healing of wounds. The benefits stem from cell repair described in the article as “waking up the cells.”

We use the Bridging® technique to restore the nano-movements and overall interconnected flow to areas immobilized by casts. Most people are not as complex as Scott and we typically see them for just a couple of sessions. It depends mostly on how many casts, how long ago, and the incident(s) leading up to the fractures.

From infants to adults, we restore your nano and micro-movements quickly returning you to the movements that define your life!