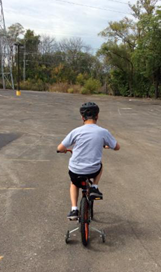 Tommy’s mom wondered if her 9-year-old son would ever ride a bike on his own.

She pushed the idea of riding for a couple of years but with no success. “It just seemed like he didn’t have the core strength or balance,” she said. “It was hard for him.”

When Tommy was in second grade he added Kinetic Konnections to his professional team at the suggestion of his Optometrist. One of the long-term goals was bike riding, but there were more important school and behavior-related goals that came first.

“Once Tommy began working with Kinetic Konnections, his muscles began figuring out how to work together,” said his Mom. 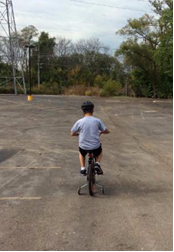 Over time, Tommy’s mom noticed his core muscles becoming stronger and his balance improving. So, this past fall they made riding his bike a priority. They brought his bike along to one of Tommy’s visits with Cara. She watched him ride, took photos and videos, and went to work.

Cara checked different nano-movement combinations of his core and legs than the ones Tommy used in baseball or school. As seen in the photo above, his core was pulled off center as he peddled making it tough to keep balanced.

By working on specific movements related to the observations, Tommy’s bike riding-related micro-movements clicked! Look at the change in his core as he rode following the session (photo to the side.)

Later that same day the training wheels came off and Tommy was riding on his own! Bike shopping was next now that his feet didn’t need to touch the ground. Not sure who was more excited—parents or child!

The next weekend, he rode the seven-mile loop through Busse Woods in Schaumburg with his mom that he had always wanted to do.

“He was so proud that he could finally do it,” said Tommy’s mom. “It was a beautiful day and a wonderful ride.”

This year has been a big year for the fourth grader. Not only is he riding a bike, he is now completely comfortable in water for swimming. Best of all, for the first time, Tommy has no IEP at school!

Tommy continues to see Kinetic Konnections periodically to refine his movement skills, be it for baseball or show choir. As his body grows, he tends to need a tune-up. “When he feels ‘off’ he knows the team at Kinetic Konnections can help,” said his mom.

“It is really exciting!” she said. “He is doing so well.”

It feels like spring! I ran 6 miles out on the trail last weekend while the bicyclists were flying past.

Riding a bike looks so easy, yet, it can be so frightening when balance reactions and muscles can’t figure out what to do.

Riding bikes with family or friends at age 7, 27, or 67 is one of the most joyous activities to be found. As a parent, we want our children to share in these experiences and are so frustrated when it doesn’t happen easily.

Over time, we helped Tommy’s muscles learn ways to work together to master the nano- and micro-movements he missed as a baby. These nano-movements influenced how his vision and balance reactions integrated with his movement, both key to successful bike riding.

The day we worked on bike balance was magical. The weather was perfect so we could make real time observations. Armed with photos and video, we went back to the office and worked on core and leg movements. The litmus test was the post-session ride; a few practice runs and then he took off!

You could feel the joy and pride in mom’s text message when they got home and he took off riding.