Count yourself lucky if you’ve avoided the respiratory bugs making the rounds this winter. This season’s version seems to be accompanied by a long-lasting nagging cough.

At first the cough is nagging, annoying, and tiring. The worse the cough, the more likely chest muscles are getting stressed. When coughing lasts for weeks the coordination between the many tiny chest muscles becomes strained and coordination compromised. They simply give up after working so hard!

A Runner’s Cough and Hip Pain

Ann runs religiously several miles per day year-round and has her sights on a Spring marathon. As her training mileage ramps up, a hip pain surfaced and got worse.

She stopped in for a tune-up earlier this month. The only movement asymmetry found was in her left shoulder—no injuries to blame, instead a persistent cough earlier in the winter. The tight chest and shoulder had lost its differentiated movement and caused her entire left shoulder to tighten and round forward. The shoulder tightness caused her core to rotate which shifted her weight off-center resulting in the right hip pain. We restored the nano- and micro-movements and she ran five miles effortlessly the next morning! 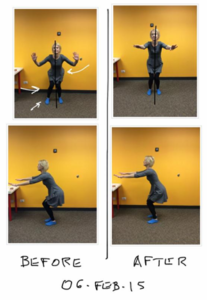 When chest muscle coordination is compromised by relentless coughing, many subtle compensations evolve. These compensations don’t really go away, although they may moderate a little over time. We often find clients with restricted movement in their upper body coincidentally have had bronchial and lung infections years ago.

The most common postural compensations from excessive coughing are:

The most common pains related to these postural compensations are:

Why Don’t These Movements Get Better on Their Own?

There are many layers of coordination between the chest and head. Much of the coordination is for really important functions—integrating our eyes and ears to core movement. Even more fundamental is the coordination of the head and chest muscles or breathing. The essential coordination is initially established in the months before we are born; nano-movements indeed! The discrete movements don’t return to normal on their own since they are not able to step out for special practice while in the middle of the game.

We are able to isolate the specific micro-movements and nano-movements impacted by so much coughing. Building upon the remaining good movements we help the body restore differentiated coordination and movement of the chest muscles. We replicate the layers and directions of movement from the period of early development when these movements are originally established.

Clients, such as Ann, are amazed at how fast they feel an ease of breath and movement!

The snow and cold are beautiful, but I miss my weekend runs in the forest—as much the zen as the exercise. I hope you are finding ways to keep moving while we await milder temperatures and longer days.

In the past few weeks we’ve seen a number of clients with rounded posture and tight neck or shoulder pains. The culprit? Compromised movement resulting from acute coughing for several weeks. People are amazed at how much their posture, movement, and breathing eases once their nano-movements are restored!

Give us a call if you’ve been coughing up a storm and still feel exhausted.