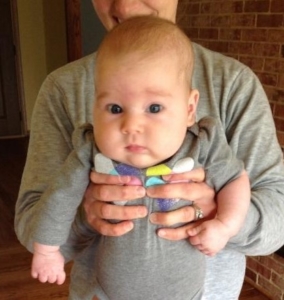 Despite everything being “normal” in her development, at 8 weeks Hannah was off track with visual-motor development.

An uneventful pregnancy and an easy delivery with a midwife, Hannah was a relatively happy baby who ate and slept within her parents expectations. So why did I have the opportunity to meet Hannah? Her sister has had significant tactile sensitivity and visual-motor challenges so Hannah’s parents wanted to make sure Hannah was not headed down the same path.

There are very simple key postural relationships and motor patterns that are observable at the age of 8-10 weeks. The head and body have been gaining strength and stability since birth and by 8-10 weeks, babies on tummies should be able to hold their heads up similar to a “Cobra” position in yoga. In this “Cobra” position, babies look around at the interesting world surrounding them. As they get more stable in this position, infants are able to lift their head to a 90-degree position and begin reaching for things. Yes, they roll over, and that is also developmentally a good thing!

Hannah, at 8 weeks, was not beginning to get her arms in a push-up position to develop the head lift in the above sequence. We even tried to place her arms in this position and she didn’t like it one bit. Despite everything being “normal” in her development thus far, Hannah was already at risk of getting off track with visual-motor development. Something her parents understood and hoped to avoid.

Tummy time is so critical to infant development. We checked to make sure Hannah’s core stability allowed her to comfortably be stable in the tummy time position—it was not equally developed. She was not arching with her back yet, making it harder for her to lift her chest and head. The babies who fuss and cry when placed on their stomach are often asymmetrical in their core stability. They generally don’t grow into being more comfortable; the lack of tummy time keeps an infant from developing key interactions for later skills.

Another tummy time skill is the feet touching the ground and pushing. This evolving leg push leads to essential transitions used to crawl, sit, and stand. Hannah’s left foot and leg weren’t very stable so she wasn’t able to do much pushing with it; her right foot was doing ok. This imbalance is something we often find with children who have sensory integration concerns or adults with lower back pain.

Being able to rollover in both directions is an important ingredient for toddler visual-motor and oral-motor abilities. Hannah’s core asymmetries allowed her to begin turning from right to left, but not left to right. Hannah’s mother realized nursing on one side was harder than the other. The early integration of head, eyes, jaws, and the tongue is so important to more complex visual-auditory processing and social communication. This integration is one we often find lacking in older students with labels of ADD or ADHD and processing delays. Not to imply Hannah would have had challenges in this development, but it is not on an optimal track. 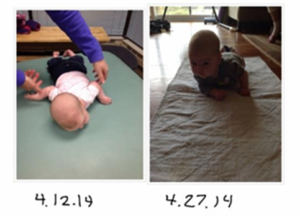 The most asymmetrical aspect of her development by 8 weeks was the rotational stability in Hannah’s core and the lack of stability in her left leg. By applying the passive stretches of Kinetic Bridging®, her core stability evened out and her foot/leg function became more engaged. Her head posture became more relaxed, too. Mom reported that she nursed more evenly from both sides with less sitting up. She even burped! (This was when mom told us that Hannah hadn’t been burping before.)

In the photos, you can see how her core is more relaxed and extended. She is in a better alignment for her tummy time development. Two weeks later, I paid Hannah a visit to see what new skills she was doing. She was able to put arms in front of her, lift her head, and roll over. What fun!  Amazing what 15 minutes of Kinetic Bridging® and new micro-movements can lead to! 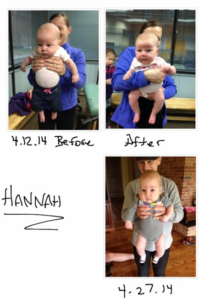 But My Pediatrician Said Everything Was Ok

We find most parents have been tuned into the motor skill gaps of children we work with, but were dismissed by their pediatrician. The pediatrician evaluates very basic aspects of motor skill development to ensure a major gap is not developing. We find the minor gaps are just as important since these are when the foundation for so much integrated visual-auditory motor skill is being established. Tiny gaps can create barriers in formation of more complex skills in both sports and academic realms.

What Can I Check on My Own?

One of the most basic visual-motor skills we assess is presence of independent eye tracking from head movement. Do the eyes track up/down, left/right easily and symmetrically without other movement or stress in the body, face, or jaw? It is amazing how much this simple observation can reveal! Some of the annoying oral-motor habits of students support stabilizing eye tracking. New micro-movements can unlink these.

A 3 to 4-month infant milestone we assess passively is the superman position—can we lift up hands and have the arms, shoulders, and head easily follow? We do not check a person actively trying to do a “superman” exercise since compensatory muscles may be recruited, so it appears to be developmentally correct. When we lift a person’s arms passively, ideally the shoulders and head easily follow fluently and lightly. All the developmental elements to stabilize are in place, so the head pops right up and eyes look around ready to reach out and grab something interesting! Those of you who have seen us test this know how cool it is to see the head stability change!

From infants to adults, we restore your micro-movements quickly returning you to the activities that define your life.

A Note from Cara

We work with all ages to restore micro-movements normally developed as an infant. When we get the chance to see an infant, it is an amazing reminder of how these essential building blocks of movement really do develop. It’s like program code turning on right in front of our eyes!

Also essential are the micro-steps of integrating our sensory systems with our movement ability.

Why is this important at older ages?

If your visual-motor skills could use a little pick-me-up give us a call!